The popular tourist towns of Vernazza and Monterosso were devastated when landslides filled the streets with debris up to four metres deep. But these Italian holiday spots are coming back to life.

Thirty-two years ago, I met two American college girls while hitchhiking in Switzerland. They were studying in Florence, and I asked them their favourite place in Italy.

They surprised me by naming a place I had never heard of before: the Cinque Terre.

Curious, I headed south and discovered a humble string of five villages along Italy’s Riviera coast with almost no tourism — and, it seemed, almost no contact with the modern world. I fell in love with this stretch of Mediterranean coastline and have returned almost every year since.

In October 2011, a freakishly intense rainstorm ripped through the region and inflicted serious damage on the Cinque Terre towns of Monterosso and Vernazza.

Torrents of water from the surrounding mountains rampaged through the towns, carrying with it tons of mud and debris. Massive flooding destroyed homes and businesses. Landslides filled the streets with rocks, dirt, and debris up to four metres deep. Entire ground floors were buried.

Photos and videos of the devastation show store fronts ripped off and fishing boats crumbled on rocks. The images of spindly, pastel Vernazza buried in rubble were especially difficult to look at.

I’ve been there so many times that I actually think of it as a person. I believe I know more people in Vernazza than in all of Spain. After the disaster, the town looked like a crime scene. I felt as if I’d lost a friend — as if nature had murdered someone I loved.

For some, it did. At least six people died in the flash floods. In one heartbreaking account on the Save Vernazza website (savevernazza.com/), Valentino Giannoni recalls the tense hours in his father’s gelato shop as he did everything he could to keep his wife and 3-year-old son above the rising tide.

They survived — but Valentino’s father was swept away while trying to keep the flood from consuming his family.

One of my staff members was also in Vernazza at the time. She and her family were eating pasta with pesto when water started seeping into the restaurant. As the waters rose, everyone migrated into another room and took refuge on tabletops. Several people pressed against the door to try to keep the water from raging in.

As the group waited for the storm to subside, they started to smell gas. The floodwaters had ripped the restaurant’s stove from the wall, leaving an exposed gas connection. Now they didn’t know whether they were going to drown or die in an explosion.

After more than two hours, the floodwaters receded temporarily (likely slowed by a pile-up of jumbled, overturned cars in the ravine), allowing everyone in the restaurant to escape to higher ground.

Soon after, the rain increased, and the river rose even higher, pushing everything in its path into the sea.

My staff member and her family ended up at Al Castello restaurant, where the owners provided food for about 100 tourists and townspeople. Later that evening, the owners of the Gianni Franzi hotel took them in; they were evacuated by boat the next morning.

Since the flood, I’ve heard from many friends in the region. Vernazza and Monterosso are in for a bleak, backbreaking time of rebuilding, but they are determined to come back. One hotelier in Monterosso has promised to fix the damage in time to welcome our tour group coming in the spring.

I’ll be back too. One of my favorite rituals in Vernazza is to walk the main drag at midnight, from top to bottom.

In ancient times, a stream rushed down the middle of this street. At some point, generations ago, the stream was put under the pavement. But it still flows, draining water from the terraced vineyards that surround the town on three sides. At one point, you can actually hear the soft sounds of water flowing beneath the road, from vineyards to the sea.

It’s strange to imagine that within the course of a few hours, this underground rivulet turned into a roaring river that claimed lives.

When people ask me what they can do to help, I tell them to keep the Cinque Terre in their travel dreams. Like I do almost every year, I’ll be travelling the here soon to do some filming and update my guidebook. Witnessing the damage — and the progress — firsthand will be both inspirational and bittersweet.

Most of all, I look forward to taking that midnight stroll, stream trickling underneath my feet, just like I have for the past 30 years. 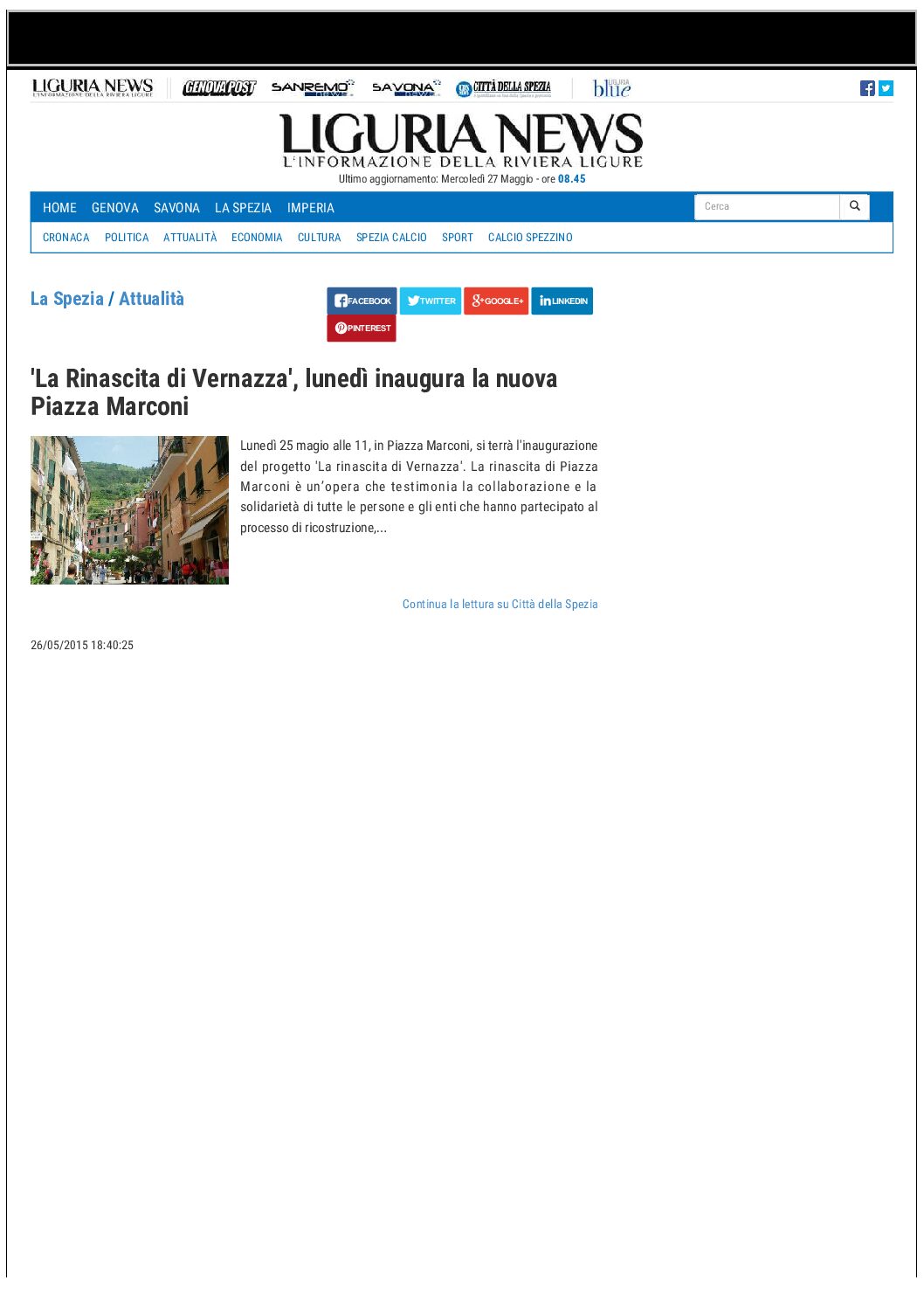 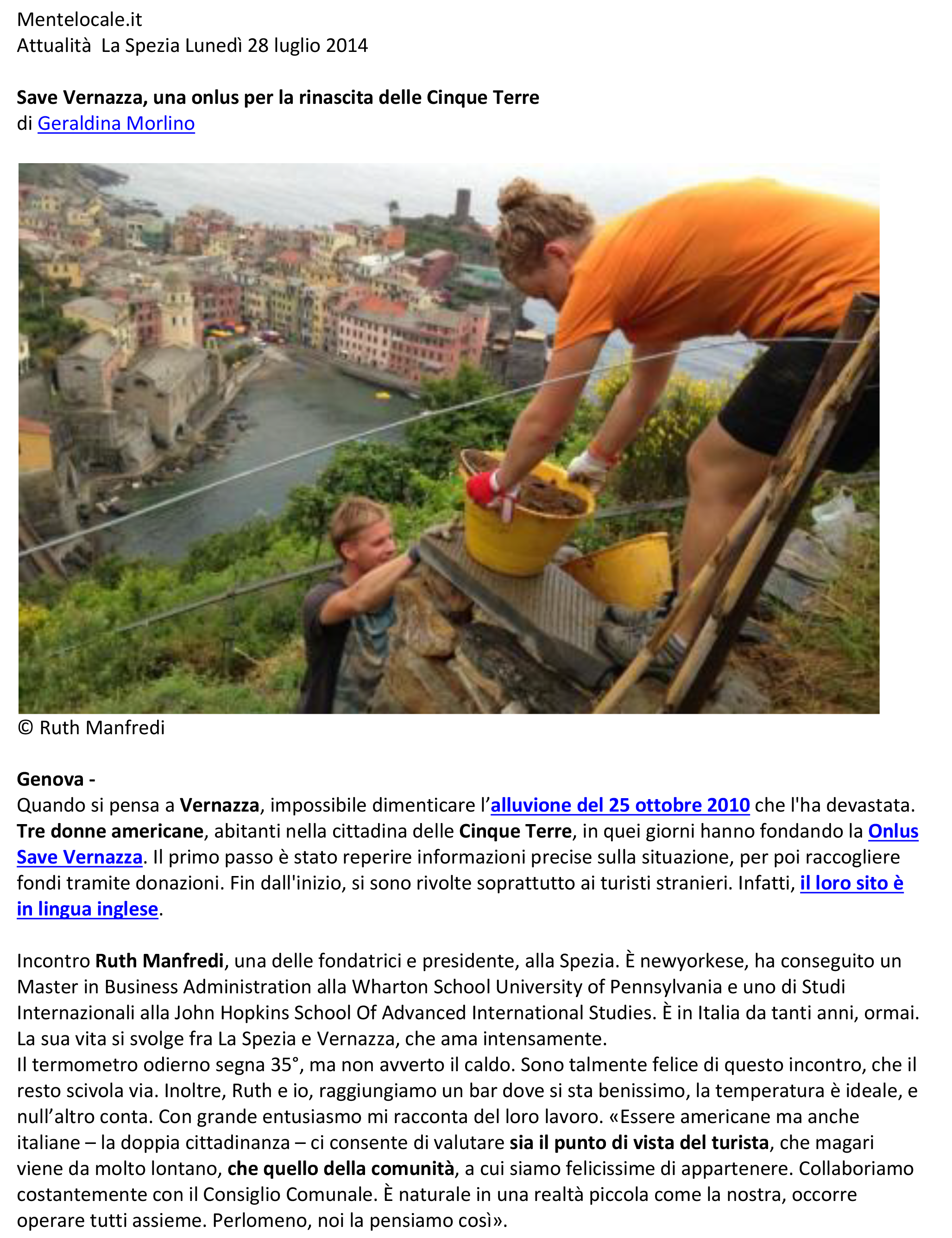 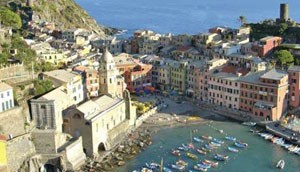